SWOT-GPM: Exploring the Complementarities in Altimetry and Rainfall Measurement from Satellite, in Tropical Basins

The project falls into the general objective of combining satellite missions in order to optimize the interest of each mission. The specific objective is to use Rainfall estimation from satellite (GPM constellation / Megha-Tropiques mission) to better understand and predict the river discharge variability as it will be observed by SWOT. The topic is important to improve SWOT applications in 2 ways:

The first contribution of this proposal - in link with other SWOT proposal - is in assessing satellite rainfall product performances and uncertainties over several Tropical basins, understanding their scale dependence, analyzing the error structure (i.e. space-time correlation) and studying their propagation through hydrological models, for discharge simulation in various hydro-meteorological context.

The project will benefit from the experience of CPTEC in the domain of rainfall estimation and validation, and rainfall error propagation in Brazil (Falk et al. 2015 a and b), and of the French Megha-Tropiques team over Africa (Casse et al, 2015, Roca et al, 2015). The data from the CHUVA campaigns (Cloud processes of the main precipitation systems in Brazil: A contribution to cloud resolving modeling and to the GPM) and from the future SOS (Sistema de Observaçao e previsao de tempo Severo) project provide radar based rainfall estimates under many rainfall regimes in Brazil. In Africa, high resolution gauge network and some radar data has been collected through the MTGV effort. This reference data sets are quite unique in the Tropics.

The work will be based on:

Ensemble rainfields accounting for uncertainties, developed in the present proposal, will feed into the MGB model which has been already set up in several Brazilian basins, including the Amazon (Paiva et al. 2013) and in 2 major rivers in Africa: Congo and Niger. Model output and the discrepancies with observation will be analyzed. Sensitivity studies will be carried out to assess the impact of various type of uncertainties (from the forcing ; from the model ; from the altimetry data and specially its sampling ) in the predicted discharge.

Figures 1 and 2 (below) illustrate some of the expected outputs with the example of the Niger River, in Niamey, an area prone to heavy flooding due to the combination of two effects: slow rise the river (detectable with altimetry) and fast response due to nearby heavy rainfall events (detectable with satellite rainfall analysis).

Figure 1. The Niger river near Niamey (red star) showing the main river and the 3 right bank tributaries, upstream of Niamey, that are responsible for heavy flooding early during the rainy season (July-September) before the main flood peak arrival (Nov-December). These early season floods – also called red floods - have been increasing drastically in the last decade (Casse et al., 2015a and 2015b). Left: superimposition of current operational altimetry tracks. Right: the future sampling with SWOT. 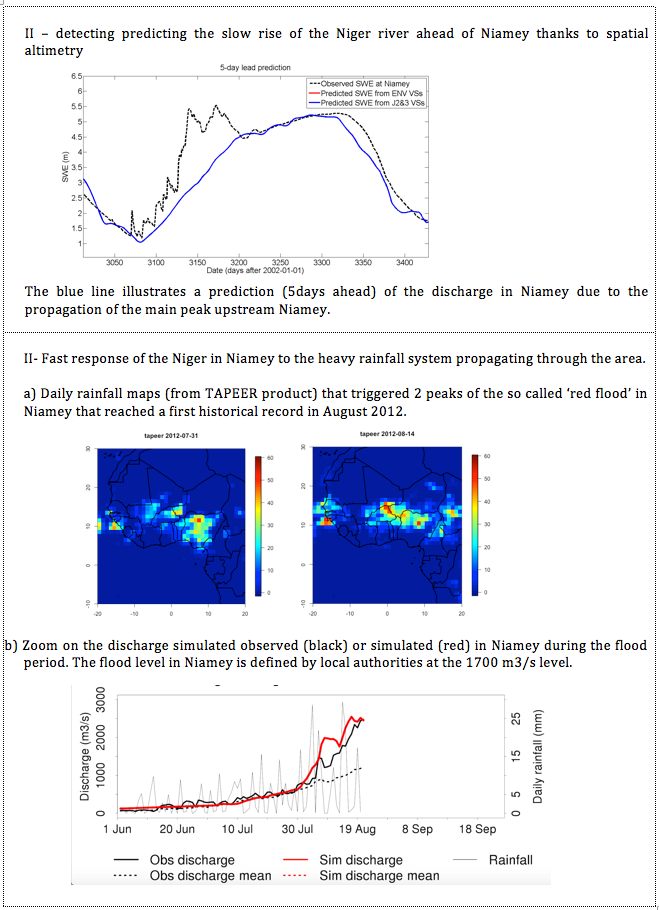 Figure 2. Towards a prediction of Niger river flood in Niamey by combining monitoring of the upstream discharge by satellite altimetry and simulating the local runoff due to heavy storms near Niamey.

Checking the consistency between independent satellite measurements of the water cycle can be used as an indirect validation method. A corollary outcome of the present work is to explore how altimetry measurement can help assessing the biases in rainfall products and their stability in time, in regions where no rain gauges are available. A preliminary illustration is presented below over the Congo river region.

Paris et al. have developed a method to derive a first guess discharge from altimetry data anywhere along a river: the method is based on deriving height-discharge relationship from measured height and simulated discharge. The robustness of the derived height-discharge relationship is impacted by the quality of the rainfield used for forcing. Preliminary comparisons are shown above when 2 different forcing are used to derive the relationship in the Congo river area. The left panel shows the results obtained using TMPA 3B32 (v7 – gauge adjusted version) and the right panel is for the Megha-Tropiques mission TAPEER product (Roca et al., 2016).

Figure 3. Checking inter-annual consistency between the satellite observed height (x) and the satellite rainfall based simulated discharge (y) over the Ubangui sub-basin of the Congo. (2a) Forcing of the MGB model based on TMPA 3B42 v7 (gauge adjusted). (2b) Forcing based on TAPEER product.

Falck A., Maggioni V., Tomasella J., Vila D. and Diniz F. (2015a). Propagation of Satellite Precipitation Uncertainties through a Distributed Hydrologic Model: A Case Study in the Tocantins-Araguaia Basin in Brazil. Journal of Hydrology. 10.1016/j.jhydrol.2015.05.042.