This project aims to improve the prediction and characterization of internal-tide sea surface displacements using global numerical simulations with 1/100 (≈1 km) horizontal resolution. The high resolution simulations are conducted using the linearized Coupled-mode Shallow Water model (CSW; Kelly et al., 2016), which can resolve small-scale internal tides that are absent in coarser resolution general circulation models (which typically have horizontal resolutions of 4-10 km). The increased resolution improves the representation of internal tides throughout the global ocean, however the largest improvements occur in regions where internal tides have short wavelengths, such as coastal seas, regions of complex bathymetry, and areas of energetic mesoscale circulation. Sensitivity analysis will be used to assess uncertainties in internal tidal displacements that are due to uncertainties in bathymetry, surface-tide forcing, dissipation parameterizations, and mesoscale circulation. Simulations of interactions between internal tides and the mesoscale circulation will help to separate the stationary and non-stationary components of internal tides. The central objectives of this work are to:

The vertical modes Φn(z) and eigenspeeds cn are determined from global stratification (Locarnini et al., 2010; Antonov et al., 2010) and bathymetry (Smith and Sandwell, 1997) via the standard eigenvalue problem, which is solved using an efficient spectral method (Kelly, 2016). When n = 0 and the coupling coeffients are ignored, the system reduces to the Laplace Tidal Equations. In practice, the surface tide is treated as known, and TPXO.8 velocities (Egbert et al., 1994) are prescribed to force the internal tide. The equations are discretized on a spherical c-grid (omitting the poles) and stepped forward using an explicit Adams-Bashforth algorithm. When the model is configured with only a few vertical modes, it can be run on a desktop at 1/25° resolution, however memory usage increases sharply at higher resolution (Table 1).

Table 1: CSW's approximate computational demands for different resolutions. Preliminary estimates of global M2 internal-tide generation below 100 m are also shown. They are less than the 0.8 TW of deep-ocean surface-tide dissipation reported by Egbert and Ray (2003). The saturation of mode-1 generation at higher resolutions suggests that modes higher than n=4 may account for missing 0.16 TW of generation.

So far the project has largely focused on verifying and improving technical aspects of CSW. The base CSW source code (C+MPI with Matlab pre/post processing scripts) is now stable and will be released on Bitbucket (https://bitbucket.org/smkelly/csw) later this summer, once documentation has been added.

Substantial effort has been devoted to writing efficient code that can be executed rapidly with minimal computational resources. A spectral algorithm (Kelly, 2016) now computes vertical modes and eigenvalues more accurately and efficiently than widely employed finite-difference algorithms. Despite this improvement, pre-processing remains a bottleneck for running simulations with different background conditions. I.e., calculating eigenvalues and topographic coupling coefficients requires approximately 5,000 cpu hours for each snapshot of stratification on a 1/100° grid. Simulations with evolving stratification may require the use of eigenvalue perturbation techniques, although such methods remain untested in CSW.

CSW estimates of regional internal-tide generation (Kelly et al., 2016) have compared favorably with those of the MIT general circulation model (MITgcm; Marshall et al., 1997). However, a recent comparative study of satellite, in situ, and simulated SSH in the Tasman Sea has further validated CSW. The Tasman Sea has a strong unidirectional horizontal "beam" of internal tide energy, which originates along Macquarie Ridge (southwest of New Zealand) and propagates about 1500 km to the northwest before striking the island of Tasmania (e.g., see Fig. 1). In January 2015, in situ observations of temperature and salinity were collected at eight 30-h CTD stations and one 40-d mooring. The stations formed two "cross-beam" lines separated by approximately 150 km. Waterhouse et al. (2017) derived estimates of mode-1 M2 SSH amplitude and phase by (i) fitting depth profiles to vertical modes, (ii) harmonically fitting data to the semidiurnal frequency, and (iii) estimating each station's M2 amplitude and phase by using the 40-d mooring record to correct for the spring/neap cycle. For comparison with the in situ data, Zhao et al. (2017) fit plane waves to satellite data without high-pass filtering across the internal tide beam. These fits to "raw data" led to a significant increase in SSH amplitude, which compared much more favorably with the in situ data. Lastly, CSW was run with World Ocean Atlas stratification and forced by TPXO.8 surface tides.

The data were compared by extracting satellite and simulated SSH amplitude and phase at the 8 locations of in situ sampling. These data were then fit to a to plane wave, which in all cases explained > 80% of the variance. The satellite, in situ and model estimates of SSH all indicate a plane wave with an amplitude of 1:1 +/- 0:2 cm and a heading of about 140° counterclockwise from east (Figure 2). The satellite, coherent in situ, and simulated mode-1 M2 amplitudes are statistically indistinguishable. Although, incoherent mode-1 tides from the 40-d mooring record have an rms amplitude that is about 20% of the coherent M2 amplitude. These results affirm the accuracy of Zhao et al. (2017)'s plane-wave fitting analyses and the implementation of internal tide generation and propagation dynamics in CSW. They also suggest that robust co-tidal charts of coherent mode-1 internal tide are feasible.

Future analysis will focus on some combination of the following topics, depending on SWOT mission needs and the potential for collaboration with other teams:

Internal-tide sensitivity to model parameters: A first-order analysis using CSW will examine how sensitive the internal tide is to model dissipation, stratification, resolution, bathymetry and surface tides. These analyses will build upon the recent work by Niwa and Hibiya (2014) and Buijsman et al. (2016), who examined internal-tide energy balances in coarser-resolution global general circulation models.

Internal tide coherence: CSW simulations with evolving stratification and meanflows, estimated from satellites or global circulation models, will help determine the distribution of the incoherent internal tide (Zaron, 2017) and identify the prospects for removing it from SWOT data. 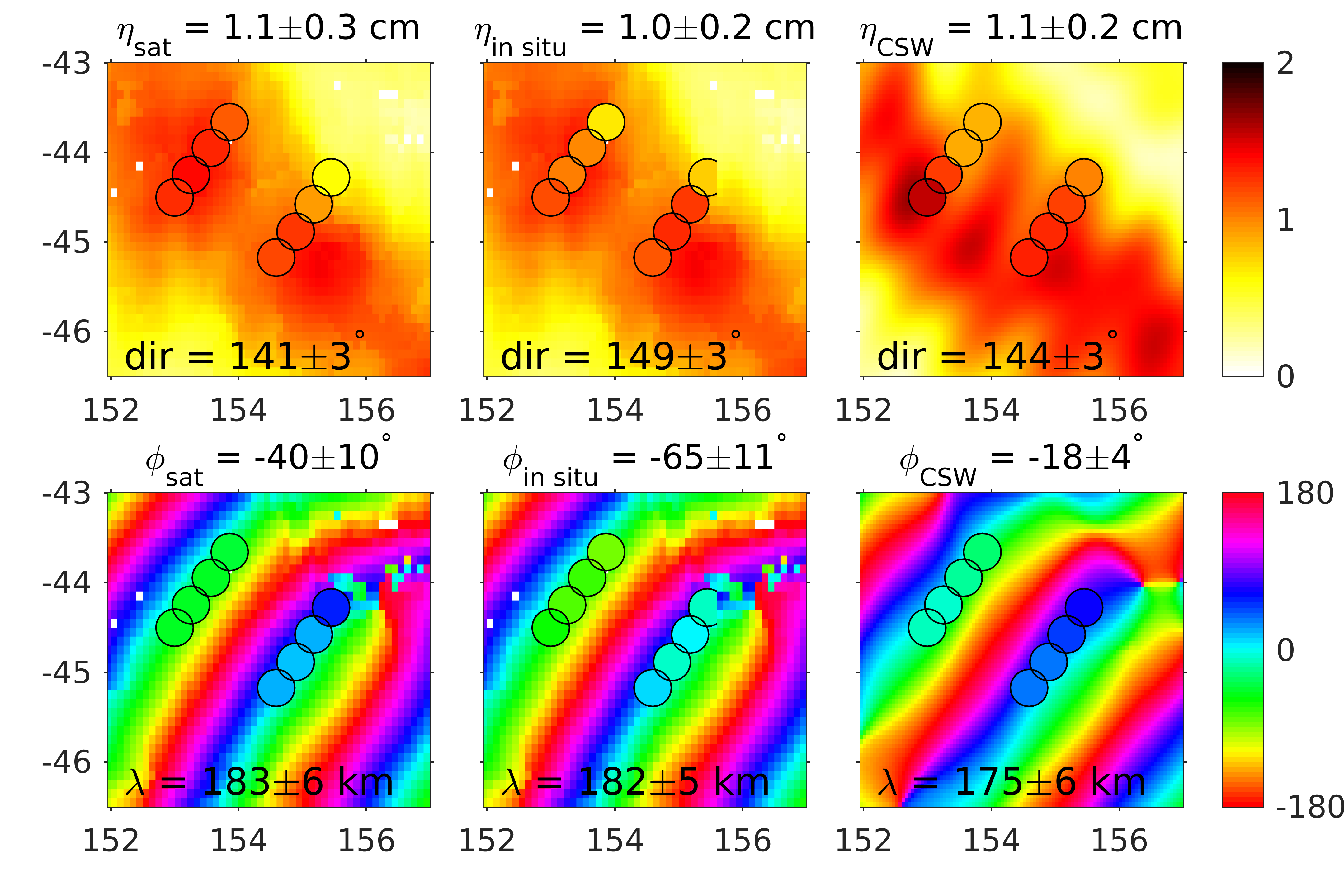 Figure 2. Plots of mode-1 M2 amplitude (top) and phase (bottom) from the Tasman Sea. Background colors in the left and center plots are from satellite data, background colors on the right are from a CSW simulation. Colored dots show satellite (left), in situ (center) and simulated (right) values located at the 8 sites that were sampled during January 2015. Reported amplitude, phase, direction, and wavelengths are determined from a least-squares fit to a plane wave.

Inverse modeling with the CSW: CSW's dynamical equations are an extension of the Laplace Tidal Equations (LTE). Egbert et al. (1994) combined the LTE with data to greatly improve surface tide predictions. The prospect of combining CSW with data to improve internal-tide predications is attractive, but the details and benefits of such a calculation are uncertain.