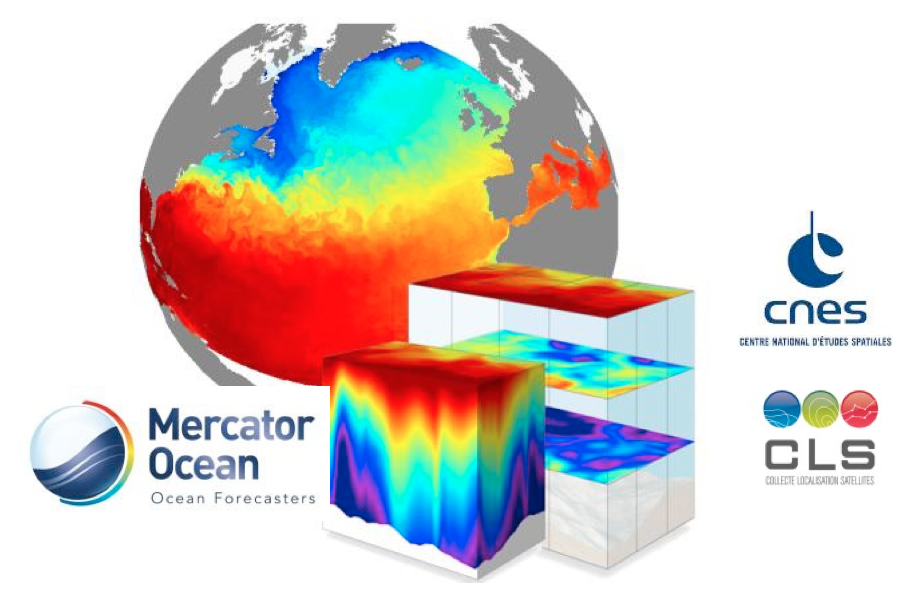 Nadir altimeter Sea Surface Height (SSH) measurements have made major contributions to the understanding of the ocean circulation. While along-track SSH data can observe wavelengths as small as 50-70 km (with a measurement noise of about 2 cm rms at 7 km) (see Dufau et al., 2017 for a recent analysis), global mesoscale resolution is strongly limited by the space and time sampling of a given altimeter mission. The use of multiple altimeters is needed to provide global maps of mesoscale variability. Various studies have been carried out to quantify the capability of existing constellations (e.g. Le Traon and Dibarboure, 1999; Chelton and Schlax, 2003; Pascual et al, 2006; Dibarboure et al., 2012); they showed that at least three altimeters are required to reconstruct the global ocean surface topography at mesoscale resolution. Yet the merging of multiple altimeter missions cannot resolve wavelengths smaller than 150 – 200 km (e.g. Ducet et al., 2000, Le Traon et al., 2001). SWOT will extend the capability of existing nadir altimeters to two-dimensional mapping at much higher resolution. This will allow observing mesoscale and submesoscale signals for wavelengths between 20 and 200 km.

The surface topography measurement will be based on both a nadir altimeter and a Ka-band Radar Interferometer (KaRIN). With a 130km wide swath, the spatial coverage will be nearly global every 22 days. SWOT should measure ocean surface topography with a precision of few centimeters over areas of less than 1 km2. Mesoscale and submesoscale features have amplitudes that are decreasing with wavenumber and the signal variance for wavelengths below 100 km is typically of a few cm2. SWOT's capability to observe mesoscale and sub-mesoscale signals will thus strongly depend on the level of measurement errors and our ability to merge SWOT data with conventional altimeter data to fill gaps in between swaths (e.g. Pujol et al., 2012).

The main objective of our project is to prepare the assimilation of SWOT in Mercator Ocean and Copernicus Marine Environment Monitoring Service (CMEMS) high resolution ocean models. Assimilation of SWOT data together with conventional altimeter missions into ocean analysis and forecasting models is an essential and (most likely) mandatory step to develop a wide use of SWOT data for ocean applications. This is also required to better address many mesoscale/submesoscale research issues. SWOT will provide very high and unique resolution observations along its swaths (effective wavelength resolution of 15 km as stated in the mission science requirement document) but will not be able to observe high frequency signals (periods < 20 days). In addition at large scales (> 1000 km), SWOT data will have to be adjusted and merged with conventional altimeter data. A major challenge will thus be to combine SWOT data with conventional along- track altimeters together and in-situ observations (e.g. Argo) with very high resolution models (resolution of a few km) to allow a dynamical interpolation of SWOT data and a description and forecast of the ocean state at high resolution. SWOT measurement noise will also be quite complex and will include different sources of correlated errors (e.g. roll error) that must be properly taken into account in a data assimilation scheme (e.g. Le Henaff et al., 2008) to ensure an effective use of SWOT data.

The following activities are planned:

Our approach will be based on the development and use of Observing System Simulation Experiments (OSSEs) in high resolution models with and without tidal forcing. This will allow us both to test new data assimilation techniques but also to assess the contribution of SWOT data for ocean analysis and forecasting. OSSEs typically use two different models. One model is used to perform a “truth” run - and it is treated as if it is the real ocean. The truth run is sampled in a manner that mimics either an existing or future observing system - yielding synthetic observations. The synthetic observations are assimilated into the second model, and the model performance is evaluated by comparing it against the truth run. Mercator Ocean has performed first OSSEs of SWOT observations using a 1/12° regional model of the Iberian Biscay region that includes tidal forcing and internal tides. The truth run was derived from a 1/36° model run over the same region (Benkiran et al., 2017). This study demonstrated the feasibility of assimilation of SWOT data in the Mercator Ocean high resolution models. It also demonstrated the high potential impact of SWOT observations to constrain ocean analysis and forecasting systems (see figure 1 below). The study did not take into account, however, the full error spectrum of SWOT and also revealed that further improvement of the use of SWOT could be obtained with improved data assimilation schemes. 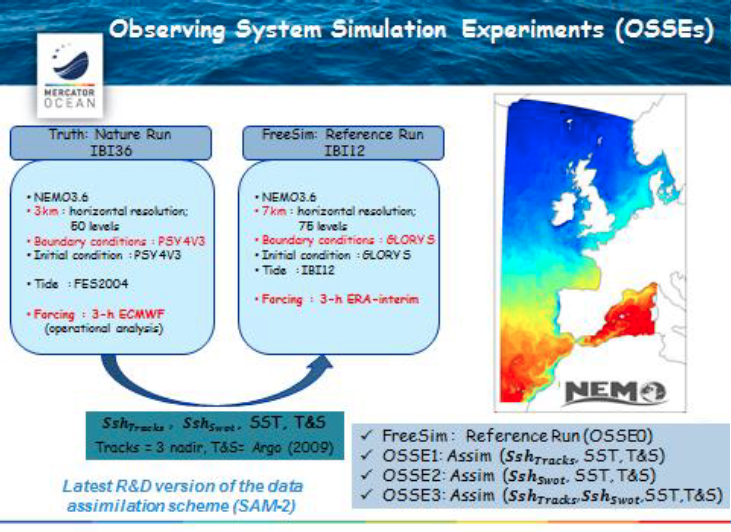 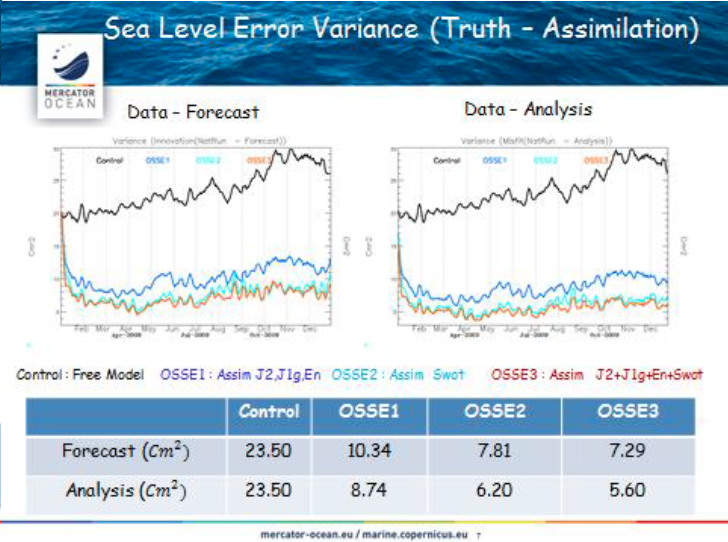 Assimilation SWOT data into global high resolution ocean models is a major scientific and operational challenge. The assimilation of SWOT data together with other satellite and in-situ observations in high resolution ocean models will be highly valuable for many science investigations. A successful « integration » of SWOT data in Mercator Ocean and CMEMS global and regional modelling and data assimilation systems will also allow demonstrating its usefulness and impact for a wide range of ocean applications. Applications that will most benefit from SWOT observations are related to the very high resolution observations that SWOT will provide. The assimilation of SWOT data in ocean models will instrumental to control smaller scales (< 100 km) that are not well constrained by conventional altimeters. Most impacted fields will be surface and intermediate horizontal velocities. This will directly impact key applications such as marine safety, pollution monitoring, ship routing, offshore industry. A better constraint of vertical velocities will also directly impact biogeochemical applications.