A UK-wide programme of research in preparation for SWOT

The OSIRIS project brings together the work plans of seven investigators from five UK organizations, including University of Liverpool (UoL), the National Oceanography Centre, Southampton and Liverpool (NOCS and NOCL, respectively), Plymouth Marine Laboratory (PML) and the Centre for Polar Observations and Modelling (CPOM). The consortium gathers a broad range of UK expertises which will contribute to different aspects of SWOT research priorities for oceanography and cryosphere.

OSIRIS activities consist of a series of independent studies developed by the various groups within the consortium. These studies cover open ocean and coastal oceanography, as well as sea-ice and atmospheric effects on instrumental performance. They are based on the development of new analysis techniques and methodologies from examination of model output and improvements to modelling, or through the construction of datasets and climatologies based on currently available satellite data.

These activities can be structured into 3 main categories, each comprising of one or more work packages (WP) associated with a defined objective:

Up to date, the major results from the consortium activities have been obtained for WP1.2, WP2 and WP6.

Two idealised simulations of the North Atlantic circulation with the Q-GCM model. 10-year mean surface dynamic pressure (m2s-2) for: a) the control run b) a run with spatially uncorrelated AR(1) forcing of pressure. Standard deviation of the pressure (m2s-2) filtered to include only low- frequency variability greater than 180 for c) the control run, d) the AR(1) forced run.

The forcing is able to generate low-frequency variability in the Gulf Stream region and also intensify the subtropical gyre. SWOT observations will add extra information to the frequency-wavenumber spectrum, which may then be used to constrain the stochastic forcing. 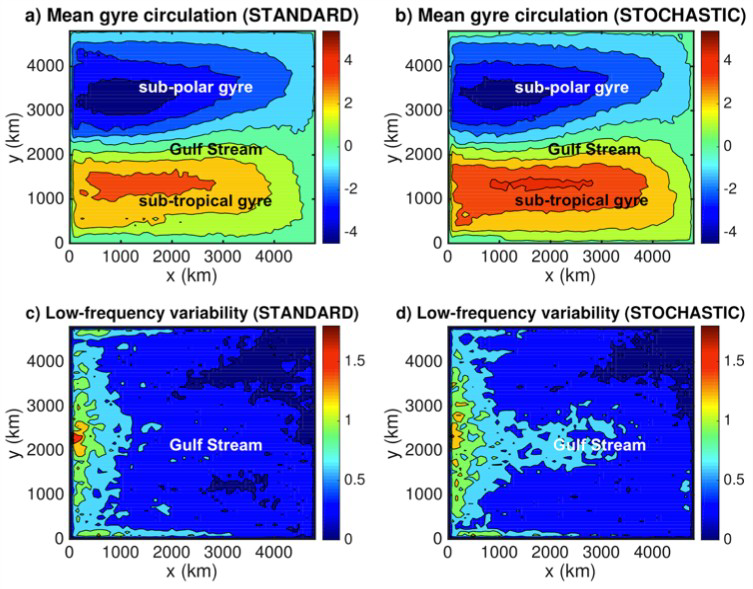 As part of an ESA-funded programme (GOCE++ Dycot), data have been gathered from 301 tide gauges around the world that have known GPS ties. The figure shows the 2003-2007 (inclusive) mean dynamic topography computed from these values, in combination with the Eigen-6c4 geoid up to degree and order 2190. Black circles show these dynamic topography values, together with the equivalent values from a series of ocean models (colours) and altimetry-based dynamic topographies (other black symbols). The tide gauges are ordered approximately following the world coastline: Northern Russia, Europe, Africa, the Indian Ocean, East Asia, Indonesia, Australia and New Zealand, Pacific Islands, Pacific Americas north to south, Atlantic Americas south to north, Antarctica (one point).

The agreement with coarse resolution models (1 degree resolution; open symbols) is notably worse than with finer- resolution (1/4 to 1/12 degree), as is particularly clear in the western North Atlantic region (approximately gauges 230 to 295). The tide gauge results show a systematic difference from models on tropical Pacific islands (178-200), tentatively identified as an effect of the unresolved and similar geoid structure associated with these sites. We also find (not shown) that the in situ gravity contribution to the geoid is crucial, with much worse agreement using only the resolution achievable with satellite gravity.

This first stage of work will be extended by considering how and where coastal altimetry can be used to improve the measurement of coastal sea level, and reduce the impact of the smallest resolution features in the geoid. 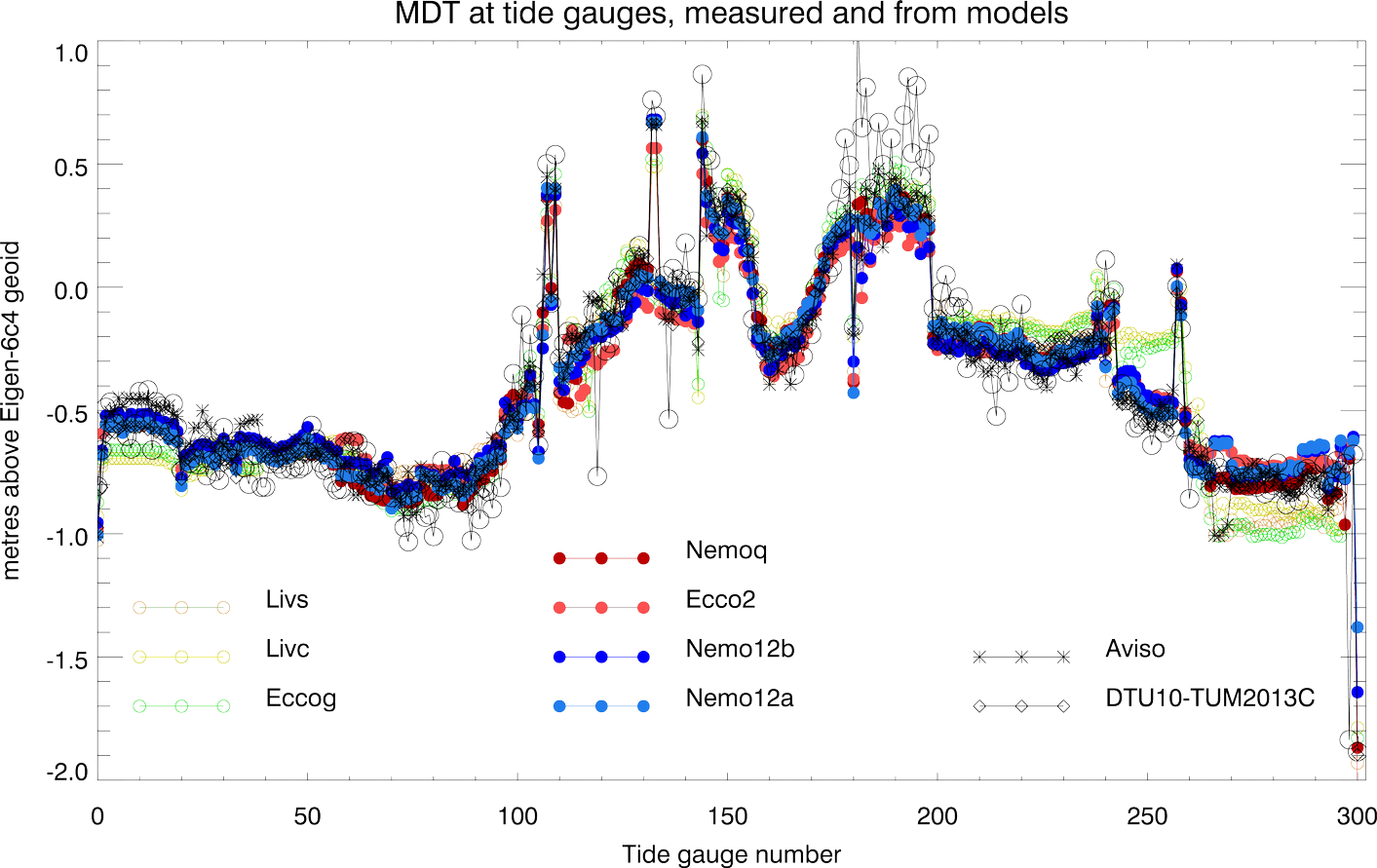 We have considered 2 years of AltiKa data (Jan 2014-Jan 2016) and looked at the frequency of steps of 1dB (positive or negative) between 2 consecutive 1Hz records. This means the average footprint considered here is smeared over 7km along track, with the records 7 km apart. The percentage of step changes exceeding 1 dB is shown in the top plot of the first figure (note the use for a non-linear colour scale to show how low the occurrence is in many regions). There are 4 main likely causes -- i) Rain (providing strong attenuation), ii) Ice (either icebergs giving bright reflections or leads within Arctic sea-ice providing a near-glassy surface), iii) Slicks (either biogenic or mineral oil causing very flat conditions, possibly associated with "sigma0 blooms") & iv) Small-scale wind variability in very calm conditions.

A consideration of the local conditions is shown in the 2nd figure, with sigma0 being backscatter strength [median value=11.2 dB, and 10th & 90th percentiles being 9.2 & 13.2 dB, representing highest and lowest winds respectively] & LWC=radiometer-derived Liquid Water Content, denoting excessive moisture in the air, as a likely indicator of rain. High LWC values at high latitudes are probably due to ice rather than atmospheric moisture.

Using this contextual information, we define rain-likely conditions as LWC>=0.4 AND -50<= lat <= 50. The second plot in the first figure shows the probability of steps in sigma0 exceeding 1 dB in these conditions. The 3rd plot in that figure is for calm conditions (LWC<0.1 AND -50<= lat <= 50 AND sigma0>13.2). This will include 1dB steps dues to slicks or small-scale wind variability.

The analysis will be repeated using the 40Hz data, thus with smaller real instrument footprint, and permitting step changes to be examined at a scale of 1.5-2km (i.e. the limitation of the field-of-view). 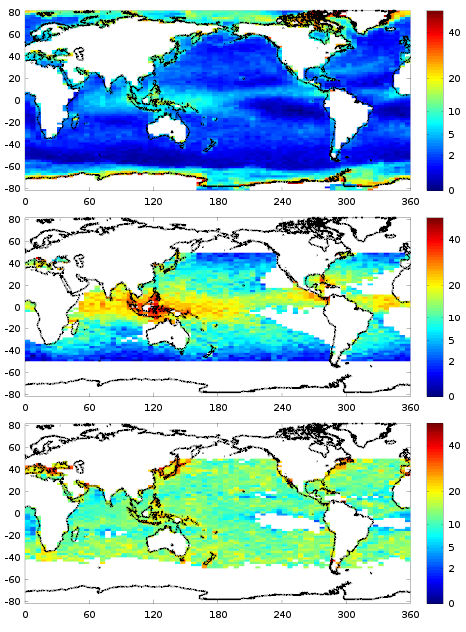 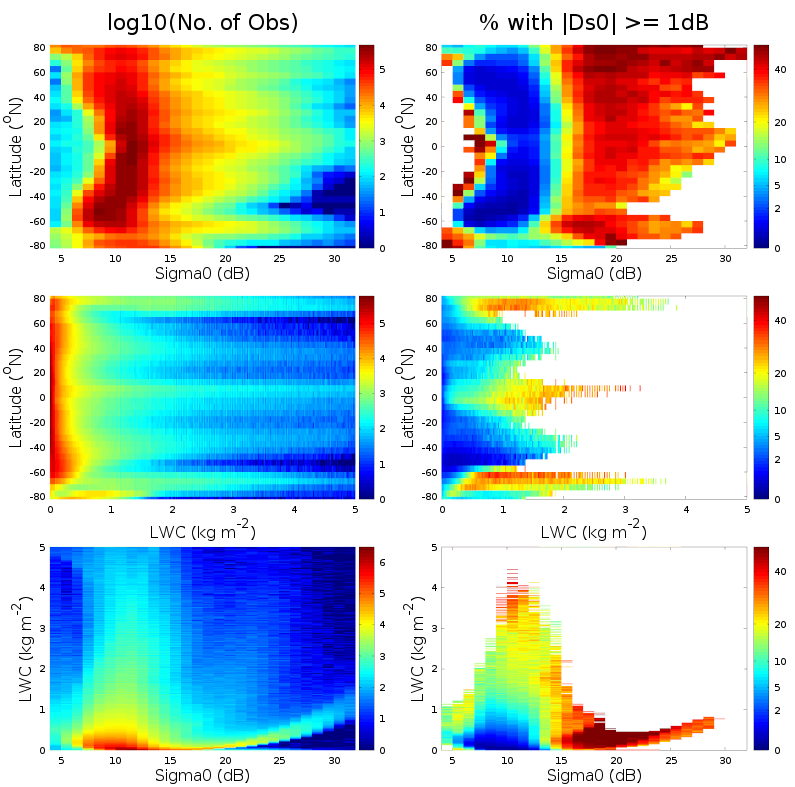